Changing course often meant repudiating his own work. Pasolini first classified his bawdy medieval adaptations — “The Decameron” (1971), “The Canterbury Tales” (1972) and “Arabian Nights” (1974), collectively called the “Trilogy of Life” and just released in a boxed set by Criterion — as apolitical works, then proclaimed them radical celebrations of carnal pleasure. But when their popularity spawned numerous soft-core imitations, he revised his opinion again and published an “abjuration” of the trilogy.


Definition of carnal in English:

When News Corp. splits in two next year, the publishing company to emerge will have deep roots in Australia, with not only newspaper assets there but interests in Australian and New Zealand television.
According to 'The Wizard of Oz' creator Lyman Frank Baum [May 15, 1856-May 6, 1919], he thought of the name 'O.Z.' when he looked at his filing cabinet drawers marked 'A-G', 'H-N', and 'O-Z'.


The Wonderful Wizard of Oz is a children's novel written by L. Frank Baum and illustrated by W. W. Denslow. Originally published by the George M. Hill Company in Chicago on May 17, 1900, it has since been reprinted numerous times, most often under the name The Wizard of Oz, which is the name of both the 1902 stage play and the well-known adaptation 1939 film version, starring Judy Garland. The story chronicles the adventures of a young girl named Dorothy Gale in the Land of Oz, after being swept away from her Kansas farm home in a tornado. Thanks in part to the 1939 MGM movie, it is one of the best-known stories in American popular culture and has been widely translated. Its initial success, and the success of the popular 1902 Broadway musical which Baum adapted from his original story, led to Baum's writing thirteen more Oz books. The original book has been in the public domain in the US since 1956.
Baum dedicated the book "to my good friend & comrade, My Wife", Maud Gage Baum. In January 1901, George M. Hill Company, the publisher, completed printing the first edition, which probably totaled around 35,000 copies. Records indicate that 21,000 copies were sold through 1900.[citation needed] Historians, economists and literary scholars have examined and developed possible political interpretations of The Wonderful Wizard of Oz; however, the majority of the reading public simply takes the story at face value. 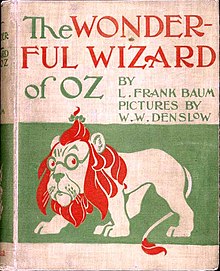 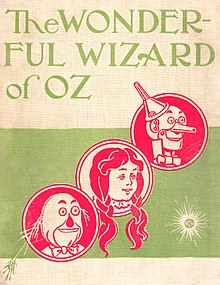